The traders of Oakengates will revive the town's chamber of commerce in a bid to fight back against burglars who have targeted charity shops. 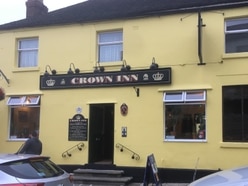 Traders held a meeting at the Crown Inn on Thursday in response to a series of recent break-ins, and they resolved to bring back the chamber to help push for increased security and deterrence.

About 20 people from the town turned out to the meeting and told town councillors about their ideas, which included better CCTV coverage around the shops, warning signs to deter opportunistic burglars, and more lighting.

Jackie Gauden came along from Community Helpp, which was burgled twice in the last month or so.

She said she would like to see the shutters at some shops in the town changed back to the old style which she said were more secure.

The meeting was organised by Jane Edwards, manager of the British Red Cross shop that was burgled three times in three months, and John Ellis, who runs the Crown Inn and is also an independent town councillor.

He said he was thrilled with the turnout and engagement of the business community, and urged as many people as possible to come to the next town council meeting on September 3 when the issue of the burglaries will be discussed.

Three other independent town councillors also attended, as well as Mark Blackstock from West Mercia Police who suggested the traders use crime-deterrent technology.

Christine Orford runs Christine's Florist in Oakengates and was the chair of the chamber of commerce years ago. It dissolved about six years ago.

She agreed to speak to businesses and bring the chamber back so that the traders have an official voice in discussions with the town council, borough council and police.

She said after the meeting: "We need to get Oakengates back on the map for the good reasons. The town council need to start talking to us traders again and taking into consideration what we want.

"We have all worked on the chamber before and we will do it again. We will get it back up and running now, they have asked for it."

Nigel Booth runs All Floors 'n' Rugs and is a former chair of the chamber of commerce.

He told the meeting: "We are determined to make this area crime-free. This meeting is to make Oakengates a better place – in fact the best place."

The town council meeting on September 2 will take place at the Wakes from 6pm, and there will be time set aside for the public to speak.

Wellington's history man calls it a day after 55 years

Veteran Wellington historian Allan Frost is bowing out next month after ov..