Deafening screams and the horrific sight of a cat hanging by its skin on barbed wire – one of the people who rescued an adorable ginger moggy from a painful death has spoken of her relief that they were able to save him. 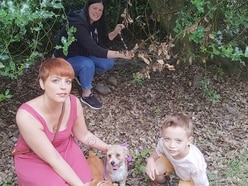 For a cat lover like Ange, who has seven of her own, the sight couldn't have been more upsetting.

Trapped on the metal, every time the animal tried to free himself, his skin began to tear.

And a pile of barbed wire beneath where he got stuck mean he was unable to put his paws down without causing further pain.

"It was horrifying to see," Ange, 35, said. "I ran up there, gasped and turned back around again because of the sight.

"Every time the cat twisted, he was screaming. He looked at us as if to say 'help me'."

Ange's neighbour Tee Louise was the first to spot the poor cat.

Tee was out walking her dogs when they started to act strange.

As soon as she noticed, she ran to get help. The first person she came upon thought it might have been one of Ange's cats, and the three of them ran back to help the stranded animal.

"I'd never seen anything like that before," Ange said. "When the RSPCA came, I helped their inspector. We put a basket underneath and freed him. It said it all in his eyes – he started purring."

RSPCA inspectors took the cat to a nearby veterinary surgery for treatment where he is said to be recovering well from his ordeal. The cat was given pain relief and the skin which had ripped has now been stapled together.

Ange, who is an administrator, said more needed to be done about barbed wire.

"It's worrying that it's there," she said. "There's other animals that are exploring in that area. It could have happened to any wildlife."

She was sure the cat would soon find a comfortable home.

"The RSPCA are appealing to find the owner," Ange said. "People in St Georges know the cat, especially around Church Street and School Street. He must have an owner, he looks very well looked after.

"Hopefully the owner will come forward, but if not people have already mentioned that he's a lovely cat and said about adopting him. They'll probably find him a home if he needs it."

Free parking in Ironbridge has been extended in an attempt to boost trade ..

A house builder has supported a Shifnal restaurant preparing to reopen in ..

A villager has been left "insulted" by the response to her attempts to get..

Back to school at major county tourist venue

The reopening of a major county museum will give families the chance to en..

Outpatients should be treated at Telford's International Centre to help ke..

Tens of thousands of eligible women in the county missed their last smear .. View More